I have been influenced by so much, but I am certain I will never truly know all of it.

As a writer, I read a lot, but I try not to be currently reading a book that has influenced me in the past when doing current work. I don’t want that book to creep into my own writing. I try to divorce myself from those influences when I produce words at the keyboard. This said, there is no denying that certain books at certain times on certain projects have been immensely impactful.

When I wrote ANY ROAD WILL TAKE YOU THERE, clearly Kerouac’s ON THE ROAD was right beside me. When I wrote OCTOBER SONG, it was work by the great travel writer Paul Theroux and the wonderfully quirky and poignant work of Chuck Klosterman that led me along the way.

In May 2019, Adelaide Books will release my memoir THE CONSEQUENCE OF STARS. It was myriad books that made their mark on me as I pulled the manuscript together. Great books. Not necessarily well-known, all of them. It was not that I was influenced by style, but rather the themes, the insight. I have come to know my writing; my style and voice. It wavers and fluctuates, but it is always—it seems—a certain tone, color, and produces a similar ring. I know who I am, I believe, as a writer. So, it was what was between the lines and in the crevices of other books that helped me realize and form my own style. 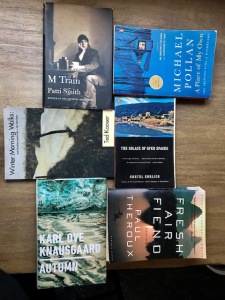 Influence is a funny thing. Sometimes we can be very specific about what has made an indelible impression on us as a writer or creator, but then there are the ethereal influences, the ones that come through our subconscious. And although pointing to a particular book is a more concrete realization, the impact can be far deeper when it comes to us indirectly by some weird osmosis.

What were my earliest influences? I don’t know. And I’m not sure I understood in my pre-teenage years what was making its mark on me. Writer Neil Gaiman likens trying to pin down influences to making deep black, wonderful, mulch from a compost. You throw in a lot of material—half-eaten apples, egg shells, wilted lettuce—and through the maturation process you get this beautiful, healthy earth. But to make sense of how you got there, how that black earth came to be, one would have to remember all the stuff you tossed in the heap.

I know that there is a familiar theme in a lot of my work—the relationship of fathers and sons. But what is most fascinating to me is that I did not come to this theme in some calculated way. It just happened. Only through the process of my writing—and likely a great amount of influence, personal and literary—did I find my writing landing on that thematic focus. And to get there I must have had many, many influences, must have had a lot of things tossed into my compost pile. How could I ever really know what all of those items have been?

For THE CONSEQUENCE OF STARS, I am certain I have had far more influences than the six books in the photo. But the authors of these works helped ignite something in me, something profound enough personally that it carried me through more than 50,000 words to build a completed manuscript that I hope is relevant to the reader. And maybe, somehow, someway, someday, this book will influence someone else— a writer, a painter, a father—and spark some new creation to share.

6 thoughts on “Influences All Around”