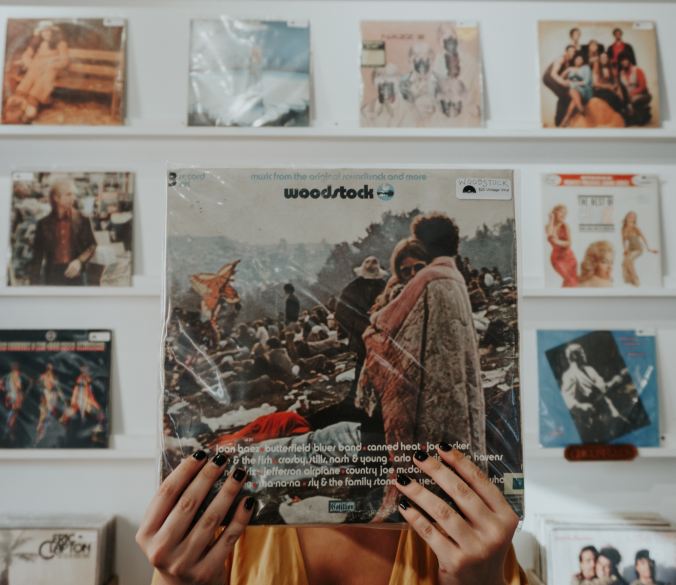 A year ago, I wrote this piece for my blog Walks With Sam. After years of considering a bigger project of walks with my dog, those many entries and a summer of regular walking have now been shaped into a manuscript. (John Hunt Publishing, UK, 2020). More on this as it develops.

I’m bringing back the original blog entry on this significant 50th anniversary of that touchstone weekend in American culture.

Back to the Garden

Sam knows nothing of Richie Havens’ frenetic acoustic strumming, Country Joe McDonald’s “Gimme an F!” chant, or Hendrix’s electrified “Star-Spangled Banner.” She knows nothing of the bad “brown acid” or how a festival with an unexpected mass of 500,000 people ran out of food and how the miles and miles of standstill traffic closed the New York State Thruway. But Sam does know mud. Woodstock celebrated mud.

Our walk today is on the anniversary of Woodstock and before heading out Sam has been sloshing around in our backyard where several days of rain have created a sloppy mess. She is not quite the naked teenager on that dairy farm in New York State, but, like many of them, Sam has been reveling in the muck. Her paws are caked. Her belly is brown from wet splashing dirt. There is no sense in cleaning her up, not now.

I hook the leash and head to the sidewalk.

Woodstock is all around me today—on the radio, in the newspaper, listed on my “Morning Briefing” email from the New York Times. It’s been forty-nine years since Woodstock. Forty-nine years? How can that be? I was 12-years old in the summer of August 1969. I knew there was something going on. The festival, with all those the crazy kids was being played out on TV with Walter Cronkite, the nightly news my parents never missed. But it didn’t register. Even though I owned a Sly and the Family Stone album and a Creedence Clearwater Revival record, the idea of going to a concert hundreds of miles from my home in Pennsylvania to see these bands and others, attending any rock concert of any kind, was not yet part of my life. This would come years later, of course. I did, however, buy the Woodstock album that was released nearly a year later, played it until the grooves hissed from wear, listening to it with my eyes closed, dreaming how it might have been.

Sam knows nothing of this dream, not until today when I tell her all about it.

“If I had been a few years older, Sam, I would have been there,” I tell Sam as she sniffs the dirt mound in the parkway just around the bend from the house where crews have been working on new drainage ditches. “Got in a car with a bunch of friends and started driving,” I continue. “And that big pile of dirt you’re admiring? That would have been a hill of sloppy mud. You would have slid down it while Joe Cocker belted in the distance.”

There’s freedom in dirt. Those kids at Woodstock believed in the recklessness of play, of making things better in the mess of it all. When it rained and rained some more, the freaks let it fly, they turned the mud into face paint and muck into joy. Sam is only sniffing her little hill of dirt, but yet she’s fascinated by the raw grunginess of it. I wait her out, let her take in what she has discovered. She paws at it and sniffs some more. Sam does not know Woodstock, but it is in her spirit.

We head east and then north, and from Crazy Guy’s house I hear music coming from an open upstairs window.

A radio station is remembering the day with music.

We remember the songs. They still resonate, much of the music remaining not nostalgic but forever embedded in so many songs that came and still come afterward.

Sam looks toward the house and the window, she’s curious, but I’m not sure why. Is it the music? Is it the volume? Either way, Sam dances a bit when she hears it.

So many have come to know Woodstock as a cliché, as some hippie monument from “back in the day.” That’s sad. Too often those who see little more than tie-dyed shirts and stoned teenagers diminish its significance. The true story of Woodstock is much bigger, much deeper. Yes, it was a mess—poor planning, endless rain, all those people invading a small rural town. But it also was a generational benchmark, a vision of something better.

“There were hardly any arrests, Sam. All those people, and no violence.” That is mostly, if not entirely true, and all with little security. A few cops, ones who could get through the traffic disaster were there. But not enough to truly do anything if real trouble had broken out. The gigantic crowd, in essence, policed itself. The Woodstockers shared food, fresh clothes, shelter from the awful weather, and drugs. “Peace and music for three days, Sam,” I say, feeling self-conscious for a second after repeating a romanticized quote from one of the many overly sentimentalized online stories that have surfaced in the last few days about that weekend at Max Yasgur’s farm.

“But yet,” I tell Sam. “We just couldn’t keep all that goodness going.”

Woodstock turned out to be a lightning strike, a utopian flash. The real Woodstock could not have been anticipated. It was the perfect counter-culture storm. It was magical, yes, but unsustainable. That kind of spirit has a short shelf life, a sad reality of the human condition. The beauty of Woodstock was not to be prolonged after that wet weekend in August of 1969. The ugliness of the era soon resurfaced—the war raged, Watergate was not far away, and the world’s rotten side, what remained then, remains today, hiding under the shaky spirit of a touchstone moment. In some ways the ugliness is not hiding at all. It’s out in the open, staring back at us.

Sam and I stand at the crossroads. Our walk has turned into a longer one than we had anticipated. I take a breath and think.

Sam’s ears perk up. Maybe she understands. We cross the street, turn right and take the next road to head south for another half-a-mile or so. And over the tops of the houses more than a block from the open window at Crazy Guy’s house, I think I hear Joni Mitchell’s “Woodstock.” We are stardust. We are golden. Or maybe I just want to hear it; I long to hear it. Maybe it is not there at all. Maybe that’s me singing those words to myself, in my own head, just for me.

Photo by Haley Lawrence on Unsplash

6 thoughts on “A Woodstock Walk”