Shelf at my desk

During a break from writing in the shed, purely for fun, I Google “being a famous writer.” Here is what comes up: How To Be a Famous Writer in Ten Easy Steps.

This is the actual the title of the post, as if “fame” is as simple as planting a flower garden or losing five pounds. Nearly everything revealed by the search is about how a writer can check off a number of steps and become super successful, make millions, and have their book made into a film directed by Martin Scorsese. Page after page of tips, to-dos, and action plans.

A friend of mine once asked, “You’re a good writer, why don’t you write a mystery?”

“I don’t want to write a mystery,” I answered.

“But I don’t want to write a mystery.”

“Good mysteries get turned into movies.”

“I don’t want to write a mystery.”

He was dumbfounded. “Don’t you want to be famous?”

In today’s world, famous means selling a million books. It means selling your book to a movie producer and the movie being an enormous hit. Of course, the book has to be moderately famous first. And just a moderate box office hit will not bring you fame. Being “famous” also means being asked to appear on the Ellen DeGeneres Show, and it means Oprah, even when Oprah is no longer a thing. 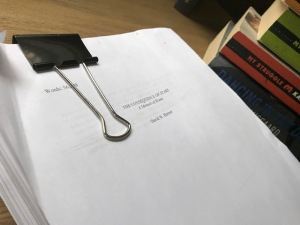 Manuscript to be published 2019

I read a not-so-famous writer’s Tweet the other day in which he said he would “rather write a cult classic than a bestseller.” He was referencing a lyric from a song by The Streets. And in a recent online interview, Cheryl Strayed (who in many circles may be considered famous because her book Wild was made into a movie) said she would rather be known for “beautiful work” which is different than “saying I want to be famous.” But that’s easy to say when you are at least semi-famous already. And consider this, most writers who are “famous” in the literary world are invisible in pop culture. Stop people on the street and ask if they know these names: Raymond Carver, Tobias Wolff, Mary Oliver, Phillip Lopate, Karl Ove Knausgaard. Most, would not know these names. So, famous to whom?

I write what I write. A memoirist is what I’ve been called. I’ll take that. I’ve been lucky to find publishers who like what I have to say and see merit in it. But if they had not accepted my words, I would have found a good editor and self-published. Would I turn my head from a contract with a Big Five Publisher?  Maybe. I honestly mean that. In the world of today’s publishing, that might not be the best route. And I’m not talking about dollars or percentages of sales, I’m talking about artistic work, work you are proud of. I do not have a Big Five Publisher knocking on my door, and maybe I would think differently if I did, but publishers routinely alter manuscripts, even very good ones, to make them, in their estimation, more market friendly. That does not necessarily mean this makes them better books, just more likely to be digested by the masses. I had an agent once who joked with me after a book’s fifteenth rejection, “Maybe you should add a few vampires to the story?” The book did eventually find a publishing home. And no vampires were added.

There are plenty of publishers who take on works they know will never sell a million copies, will sell barely a thousand, simply because they believe in the work. Those independents are vital. And writers who write what those publishers love, not what someone else can easily market, are also vital. This is not to dismiss those who write popular fiction or write purely for sales. Many do. More power to them. And I am not implying that I am some sort of artistic snob that would forever avoid succumbing to the level of what a snob might call the ignorant masses. I am not an elitist. Honestly, I’m not. I, too, in the end, like all writers, want readers to read my books.

But…do I want to be famous?

Let’s put it this way: It’s not something I think about. I’m not trying to be famous, although I am curious to wonder what that might be like. Maybe what and how I write will never be considered worthy of fame. My books will never be what the New York Times considers bestsellers and are highly unlikely ever to be cult classics. But that is okay. It does not matter. Truly, it doesn’t. And while I hang out in the shed, waiting for that slim-to-none possibility, I will not be reading any blog post entitled: How To Be a Famous Writer in Ten Easy Steps.

What I will do is get off the internet, pour myself another cup of coffee, and go back to writing.

10 thoughts on “How Not To Be a Famous Writer”