I took a long walk the other day. Before the snow melted, before it was washed away by warmer weather and rain. My dog, Sam, and I set out for a winter hike. It was a couple of miles long, long enough to re-balance. The beauty of a long walk is just that, a matter of re-balance. 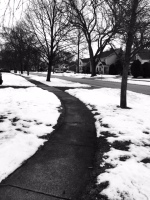 I’m also working on a new novel, a work-in-progress, based on a man who tries to re-balance his life through daily walks with his dog. The people he meets, the intersection of thought and movement of feet, the aloneness, the surge of endorphins all play a part in his redemption. But so does the dog, the dog’s intuition and the power of unfaltering love.

The morning was gray, but the snow gave it light. There were tracks everywhere. People tracks, dog tracks, tracks I did not recognize. Little feet had scampered to or from something in the hours before dawn.
In the park about a mile from home, the village had fenced off a hill to give children a safe place to sled. The snow was packed and icy. But there was plenty of evidence that it had been put to good use. 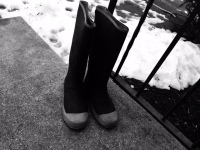 I wore my knee high rubber boots, a poor man’s Wellingtons or Wellies, as they are affectionately called. It was damp, slushy, and muddy in places. The boots allowed me to walk with Sam in the park’s most water-swollen spots. I unhooked Sam’s leash and let her run and romp. She made circles around me and around the icy pond. She ate snow. It was not easy to get her back on the leash. No dog wants to be tethered.

It was early enough that few people were outside. Not even the early, dedicated joggers or the reliable dog walkers. Just me. Just Sam. And we liked it that way. There was solace in the silence, a quiet the snow had helped to recreate. And I could think. Consider the place where I walked, and allow my mind to wander, to reconnect with the world. Not the world of the daily news, the Trump chatter, or how spring training was progressing. But the natural world, the world out in the open.

3 thoughts on “Walks With Sam”