“For centuries, Cuba’s greatest asset has been its people.”—Pico Iyer

Havana is the home of the street dog. They can be found most especially along the cobblestone walkways near the Plaza Vieja. The dogs, in a symbolic way, are the soul of Cuba, a living creature seeking companionship and a place to live in peace, a place to call home. The street dog is as much Havana as the 1959 Chevy. 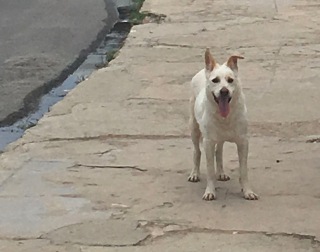 One night on a recent five-day trip to Cuba with my two sons, we sat in the late hours in the patio not far from the Plaza de San Francisco with the ancient statue of St. Francis of Assisi just down the walkway. A smallish, dirty-white, short-haired dog, curled up under our feet. He did not beg for food; he did not lean in, hoping to be scratched about the ear. The dog simply wanted to be near and he stayed with us until we left for our hotel under the steamy light of street lamps in the early morning hours. As we walked in one direction and the dog in the other, I remembered an old lesson from elementary catechism: St. Francis was the patron saint of animals, believing that all creatures are our brothers.

Credit: casey berner Instagram: @caseyberner
Earlier in the day, a number of Cubans, certain we were Americans, had been intent on discovering from which U.S. city we had traveled. They asked about Chicago and the Cubs. Did we dislike Trump as much as they did; did we love Obama as much as they did? One young man, after asking how long we would be in his country, pleaded with us. “Please stay,” he said. “You are from USA. Stay.” He, like the street dog, seemed to want to be close to something more hopeful.

Cuba has changed and is changing. You see it everywhere. This beautiful country lost in time is both enchanting and exasperating, and as it stretches out from its isolation, shifting ever-so-slowly, it seeks hope, hope that something, someone will be its savior. Its people are proud of the revolutions—the three against Spain to gain its independence and even the one led by Fidel Castro against a right-wing, authoritarian government despite its lost idealism—and they are quick to find goodness in Che Guevara, the country’s omnipresent spirit. But the people are keenly aware the idealism born in these conflicts was never fully realized. Because of this Cuba is still reaching for something else, curling up under the feet of the world, waiting to be delivered to the rest of us.

For several days, my sons and I immersed ourselves in cigars and rum, silky black beans and sweet plantains, the sights of strikingly beautiful women, giant ceiba trees, royal palms, and the taste of sugar cane. We walked in Hemingway’s footsteps and drank the liquor he drank. But we left remembering the street dogs and the hearts of the Cuban people passionately beating for more.