“English words are like prisms. Empty, nothing inside, and still they make rainbows.”–Denis Johnson. 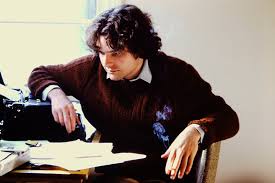 He was addicted to drugs and alcohol, even heroin, and was admitted to a psychiatric ward when he was 21 years old. But Denis Johnson got sober and got better. And so did his prose. Or should I say he simply became more prolific. He once said he thought his sobriety might hurt his writing. It didn’t. In fact, his best writing–and in my estimation the best nine paragraphs in modern literature–came when he was straight. 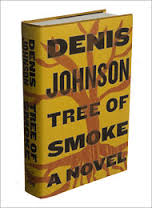 One of my favorite books of all time is Johnson’s Tree of Smoke. It was the National Book Award winner in 2007. Not everyone liked Johnson’s Vietnam War novel. The Atlantic called it “bad prose” in “unrelieved bulk.” I cannot imagine what on Earth the reviewer could have been reading. Tree of Smoke is a masterpiece, on the same shelf with The Things They Carried, (another big favorite) and The Naked and the Dead. If you read anything from a war novel, read the first nine paragraphs of Tree of Smoke. It is as perfect as any opening in modern American literature. The Atlantic does not agree and the reviewer seems to be stuck on grammar and stylistics.One can miss art when they only concentrate on mechanics.
That’s not Johnson’s only great work. Jesus’ Son is worth every word. His poetry and journalism is also not to be missed and his influences may have been as telling as his works. He once noted Dr. Seuss, Walt Whitman, Dylan Thomas, and the guitar solos of Eric Clapton and Jimi Hendrix as ingredients in his creative juices.
But despite all the drama in Johnson’s own life (he was married three times)and his work, what might be the most interesting thing about him is that he considered himself a “Christian writer.” In a New York magazine article he said, “I have a feeling God finds us pretty funny. But that’s all the speaking I can do for God–he doesn’t go around talking about me.” Johnson said God is always a theme in his work, always wondering about his existence in our troubled world.

Johnson will not be considered alongside the greats like Hemingway or Fitzgerald. Instead, he may be looked upon by some as a Kerouacian kind of character. Not in that he burned out in flames like Kerouac. Plus, he was a lot more formally trained as a writer. Unlike Jack, Johnson was able to turn around his early troubled life. Kerouac was not. Jack’s life suffered and so did his prose after The Dharma Bums. But Johnson was like Kerouac because he could, like few others, shine a light on the troubled among us–the downtrodden, the under belly, the slightly off–who, in some way, always carried a bit of heaven in them. Kerouac was the same. Some would say his traditional Christianity helped him connect to those forgotten lives. In that way, Denis Johnson deserves to be considered among the very best.