“My only writing ritual is to shave my head bald between writing the first and second drafts of a book. If I can throw away all my hair, then I have the freedom to trash any part of the book on the next rewrite.” —Chuck Palahniuk, author of Fight Club 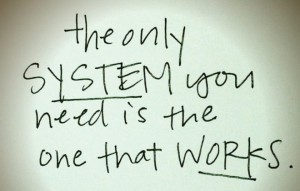 Charles Dickens, one might say, must have had obsessive-compulsive disorder. I do not mean to make light, but only to make a point: There is clearly a fine line between OCD and ritual.
Dickens had an extra door installed outside his writing study to keep out noise. He was insistent on complete quiet. Everything had its proper place. His desk was always next to the window. His writing materials—a quill pen and blue ink, only blue—precisely placed. Always on the desk, a small vase of fresh flowers and two bronze ornaments—a man being swarmed by puppies and two toads dueling. Dickens wouldn’t begin writing until all of this was…just so.
This “ritual” is explained in a wonderful book: Daily Rituals: How Great Minds Make Time, Find Inspiration, And Get To Work, by Mason Curry. He lists 161 famous artists and the 161 very different ways they approached their writing, their art, and their life’s work.
Hemingway frequently wrote standing up. When he lived in Cuba, he stuck to a pattern of writing at dawn, done at noon. Capote wrote in bed, smoking and drinking. First coffee, then tea, then martinis. Victor Hugo wrote Les Miserable in the nude. He said being naked kept him focused. He even had his valet hide his clothes. 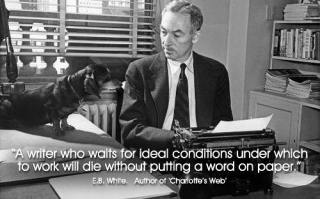 Rituals allow for concentration and motivation. They put us in a good place, a state of confidence or contentment. They calm, enlighten, and as structured and systematized as some rituals may seem, most give us solace.
I asked some writers from around the Midwest about their personal rituals. What are the little OCD patterns they must and often adhere to before they begin to create?
Mary T.Wagner: When it’s absolute crunch time, both coffee and vast quantities of chocolate are involved. But, I can’t think of any better source of inspiration than going to the Lake Michigan shoreline and letting daily cares float away on the breeze while waves lap the shore and birches and aspens shiver behind me and creative thoughts take root and grow instead.
Renee James: I wrote the first draft of my first book in airports and on airplanes, but happily I don’t fly much any more. I actually almost miss business travel because writing in airports was surprisingly energizing.
Dami Andonova: Blankets, lots and lots of blankets. Phone calls get ignored. Fire alarms are ignored. Sometimes chocolate, sometimes wine. And I am usually in a robe or my pajamas.
Beth Weindruch Prystowsky: I write in bed a lot. Sometimes I like to have mindless TV on in the background.
Roberta Miles: I write in bed in script with a pen. I must have a huge bottle of Smart Water by my side and a glass of Schweppes Ginger Ale and I will only use black gel pens.
Sue Rovens: When I sit down to write, I keep a Facebook game open. I don’t spend lots of time playing, but when I run into a tough area or get stuck, I can play because it’s mindless, and think through scenes and dialogue.
Rebeca Barroso: I have the discipline to work from home, but not to write creatively by myself. Somehow I prioritize other things above writing and I end up washing dishes, vacuuming, paying bills. Even if I go to a coffee shop, I’ll just end up on Facebook. So I joined a writing meetup. If I’m sitting down with fellow writers and everyone is typing away furiously and purposefully then I’m peer-pressured into writing my own stuff too, especially if at the end of the writing session we’ll discuss what we wrote, what we’re having trouble with, asking how to solve a plot or dialogue problem, establishing goals, whining about submissions woes, that kind of thing.. If you’re still curious, check out the Just Write Chicago group.
Donna O’Shaughnessy: My husband and I live in a 620 square-foot grain bin we converted to our home. I have a tiny office there with computer but when doing real writing, not research or final drafts, I go to a small barn on our farm, just on the other side of our cow pasture, that we turned into my studio. No electricity, no running water but big old chairs, sofa and desk from 1930’s. My son built an outhouse for me. Really, it’s beautiful, located just a few feet away.
Iris Price: I take a nap. Then wake up and make coffee. Then I put Miles Davis or Charlie Parker on, and look at the first few pages of photos on the Internet for literary triggers. Then I write. I’ve also been using only the Pilot G-Tec C3 pen since 1998. It’s been voted “Asia’s favorite pen.” I originally came from the Philippines before immigrating to Chicago. Unfortunately they don’t sell it in Chicago art stores so I order it online. My supply never runs out.
Steven Williams: Music. Lots of music, specific styles depending on what genre I want to write at the time.
Kenneth Chukwu: I write around midnight when every place is quiet, a cup of coffee by my side to avoid sleep.
Kristin Gembara: I write with a glass bottle of Coke, preferably from Mexico surrounded by complete silence, usually at night I live in Chicagoland, so in winter I write while sitting in a recliner under an afghan. In warmer weather I prefer my back porch.
Sandra Colbert: I write in the kitchen, even though I have a perfectly nice little office space. But I use that for paying bills and other things. My last book, The Reason, was written entirely at my kitchen table. And that’s where the next one is being written. Maybe it has to do with the proximity to the refrigerator. Creative juices must be fed.
Martha E. Hermerding: I have a coconut oolong tea that I love. I can only have it when I sit down to write.
Michael K. Gause: I once knew a guy who wrote after he worked out. Another, only when he drank. After writing for about twenty years, I realized I needed to train myself to be able to write anytime, anywhere. There’s simply too much to write to have to wait for this or that scenario. Headspace. It is all about headspace. On the train to and from work, the journal comes out as St. Paul blurs into Minneapolis. After lunch, it’s espresso and some speed thinking. Get the dirt into the pan. Mine for something shiny. On weekends, I get to slow down. Get some ambient music going, some candles. Or maybe my favorite bar down the street, open some of those doors in my head with an IPA. Rituals can be elaborate or stark simple.
And me? I’ve been a coffee shop writer for a long time. Like mornings best. But I’m in the process of building a writing shed on my property in the spirit of Thoreau, Dylan Thomas, and George Bernard Shaw. New rituals are waiting inside.