“It’s not what you look at that matters, it’s what you see.” —Henry David Thoreau

I read Walden for the first time in high school. I believe it was 1973. Honestly, I only read parts of it. The entire work was assigned by the teacher, but I stayed close to the sections I figured would be on the test.
In my freshman year of college, I was involved in drama productions at the university and I played the role of Henry David Thoreau in the play The Night Thoreau Spent in Jail. It was just a few days ago that I recalled this. For some reason that memory had been tucked away in my head and didn’t resurface until I read an online review of a recent performance of the play somewhere in New England.
Why was it buried?

The answer is quite simple: I wasn’t aware enough in my younger years to understand and appreciate Henry. Back then, I saw him only as an assignment, an old 19th century recluse who wrote silly nature stories, a hermit. But decades after my stage performance, and maybe a little because of it, Henry has emerged as a hero. I believe the lines I memorized in that long-ago performance eventually sunk in, or finally mixed with my maturation and understanding of civil disobedience, the art of living deliberately, and beauty of simplicity.
At Thoreau’s funeral, his friend and mentor Ralph Waldo Emerson praised Thoreau. “No truer American existed,” Emerson said. Jennie Yabroff reminds us in the introduction to her online interview with Kevin Dann, the author of the biography of Thoreau,  Expect Great Things, that Henry never married, did not drink alcohol, was a vegetarian, refused tobacco, did not own a firearm, did not vote, did not pay taxes, and did not attend church. In today’s world his life might be considered rather un-American. Still, for me, these elements of Thoreau’s personality and style solidify his true American-ness. His individualism shines through all of it and his “night in jail” for refusing to pay a poll tax that he believed would be used to pay for the Mexican-American War, which Thoreau opposed, makes him even more of an American figure and a hero. I wish I would have paid attention to this when I was in high school and in my early college years when learning those lines for a play that was written, in part, as a protest against the Vietnam War. The lessons were and are striking. But I was young, dumb, and unaware.
So, with this, I re-read Walden, all of it this time, paying attention to each word, every idea, and this time better aware of how Thoreau’s writings inside and outside that cabin in the woods remain as relevant as ever. 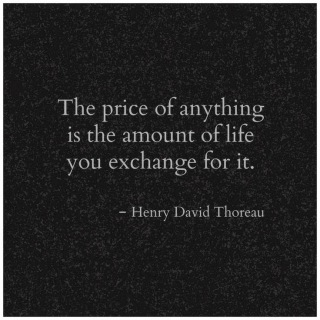